Destination D.C. – Cultural Must-Sees in D.C. Worth Building a Romantic Winter Weekend Around

The nation’s capital is teeming with ways to reconnect with art, music — and each other.

While the national monuments and the city’s history have beckoned visitors to Washington, D.C. for decades, the District’s cultural scene has been flourishing. Two years ago, visitors lined up as early as 3 a.m. to get into the new National Museum of African American History and Culture and tickets remain a hot commodity. Last year, lines stretched around the National Mall for Yayoi Kusama’s Infinity Mirrors at the Hirshhorn Museum. And this year, the unveiling of the Obama Portraits has already brought record volumes to the Smithsonian National Portrait Gallery.

So it’s safe to say that the city has now officially established itself as a cultural hub. To welcome out-of-towners visiting for a culture fix, DC’s hotels have been offering up tantalizing packages and amenities, and new neighborhoods have emerged as go-to hot spots (The Wharf, Navy Yard, and NoMa), making DC an excellent last-minute getaway to enjoy art, music, theater and much more with your other half. While every night has potential to be a perfect date night in the nation’s capital, these seven cultural pop-ups — each in town for only a limited time —  are worth building a romantic weekend trip around.LOAD PREVIOUS

No Spectators: The Art of Burning Man at Renwick Gallery

Every year, in the late summer haze of Nevada’s barren Black Rock Desert, thousands converge in the heavy heat for Burning Man festival. More than 2,600 miles away, the Renwick Gallery of the Smithsonian American Art Museum is celebrating the art installations constructed in the desert at No Spectators: The Art of Burning Man through January 21.

And just like the 32-year-old festival’s rallying cry, the “no spectators” approach encourages visitors to interact with the displays, including David Best’s Temple and FoldHaus Art Collective’s Shrumen Lumen. “The work is fully out in the open, inviting the audience to reach out and touch and get involved,” says Nora Atkinson, the museum’s Lloyd Herman Curator of Craft.

“Burning Man is about mischief and playfulness — and that comes through in the art,” Atkinson adds. “So whether couples get lost together under giant magic mushrooms or lay down next to each other to stare dreamily up at Christopher Schardt’s mesmerizing light display, it offers space to dream and act like children.”

Among the many reasons to check out the exhibit is that it continues outside of the gallery walls, with six installations peppered throughout the Golden Triangle neighborhood through December 30 as part of No Spectators: Beyond the Renwick.

Carry the creative energy of the experience by staying in the burgeoning NoMa district with the Weekend Like a Local Packagethrough March 31 at Hilton Garden Inn Washington D.C. It’s within walking distance of Union Market — home of the multi-screen Angelika pop-up, as well as some of the city’s most innovative eats.

For a nightcap, visit D.C.’s first rum distillery, Cotton & Reed, or head to City Winery, in the adjacent Ivy City neighborhood, for acts like Matisyahu on November 26 or Los Lobos on December 21 and 22. (A complimentary winery tour and tasting comes with the hotel package!)VIEW COMPLETE LIST

From tables and chairs to bathtubs and stairs, British sculptor Rachel Whiteread’s works are an ode to everyday objects. At 55, she’s the youngest artist to receive a comprehensive survey at the National Gallery of Art, with about 100 objects from her 30-year career on display in the East Building Concourse Galleries through January 13.

Standout pieces include Ghost, which she made at age 27, as well as Untitled (Twenty-five Spaces), Contents and Line Up. And, don’t miss the mattresses. “Rachel’s series of mattresses cast in a variety of materials offer an opportunity to consider the private space,” says curator Molly Donovan.

While at the gallery, marvel at liquid latte artistry from the on-site Espresso & Gelato Bar, known for its flat whites. Then hit the sculpture garden, which transforms into an ice rink from November 16 through March 10.

Get ready to channel the boldness of Whitehead’s breakthrough work with more female empowerment in DC: Visit the National Museum of Women in the Arts to catch Rodarte, the institute’s first fashion exhibition, dine at Tail Up Goat (named after an expression in service director Jill Tyler’s home of U.S. Virgin Islands) and catch a great show at 9:30 Club, where Cat Power plays on December 16 and Margo Price is set for December 27.

Turn in at The Jefferson hotel, with its History of Women itinerary. The holiday experience, offered over Thanksgiving, Christmas Eve, Christmas Day and New Year’s Eve, includes a special holiday dinner for two in the Michelin-starred Plume restaurant.

To really find out what makes your partner, ahem, tick, immerse yourselves in the interactive world of Mexican-Canadian artist Rafael Lozano-Hemmer’s Pulse at the Hirshorn Museum through April 28. Using heart-rate sensors, the three installations take each visitor’s biometric info to create a unique display, melding design and technology. So whether you’re seeing waves rippling, fingerprints dancing, or lights flashing, the artwork reflects what’s actually happening in your heart.

“By animating this intimate data on such a large scale, it transforms a public space in a city known for its grand monuments into a very personal place,” says Stéphane Aquin, chief curator of the Hirshhorn Museum. “In Pulse Room, lovers can share a heart rate sensor to mix their heartbeats, creating a ‘hybrid’ pulse that is visualized by an entire room of flickering light bulbs. Similarly, in Pulse Tank, couples can watch as their heartbeats merge as ripples in a pool of water, creating a pattern that can never be replicated.”

Continue the pulsating adventure with some live music. Head up to the U Street corridor to indie music institution Black Cat. (When it opened in 1993, Rancid and Stereolab were among the first bands to play). For a quirkier take, go to Showtime Lounge in Bloomingdale to catch Granny & the Boys – featuring eighty-something Alice Donahue (who’s dating her sixty-something bandmate Richard Lynch) on keyboard every Sunday night. If you’re in more of soulful mood, pop up to Adams Morgan instead for some blues at Madam’s Organ, where you can also enjoy the Saturday night special, the BBQ Bonanza ribs & chicken dinner.

Stay on that same frequency by retreating to The Line hotel, which has a community radio station called Full Service Radiobroadcasting from the lobby. The Fall In package includes cocktails at the Brothers and Sisters bar, valet parking and breakfast in bed.

Combine holiday fun with pure laughter at the Second City’s Love, Factually at the Kennedy Center from December 4 through 31. This is the second production as part of the venue’s new partnership with the famed comedy franchise.

Onstage, the 2003 film Love, Actually — with its universal themes of romance and the holidays, gets roasted in the most adoring way. “Like they say in Love, Factually, ‘If you look around, you’ll see that love actually is all around,’” Second City producer Jeremy Smith says. “And while this show may poke fun at the rom-com genre, we hope it delivers that same message: love always — eventually — conquers all.”

Filled with holiday spirit, shop the nearly 60 local vendors at Downtown Holiday Market November 23 to December 23. Then stroll around the Pathway of Peace at the White House Ellipse, where 56 states and territories each have a Christmas tree, leading up to the National Christmas Tree.

Or if it’s more comedy you’re craving, check out the The DC Comedy Loft where Faizon Love performs on November 23 and 24 and Jamie Kennedy on December 7 and 8. Post-show, slip into Harold Black, a speakeasy tucked behind a sliding door.

No matter which way you go, wake up with a hearty start with the bed & breakfast package at the Four Seasons.

Titanic: The Untold Story at The National Geographic Museum

No, the Titanic: The Untold Story exhibition at the National Geographic Museum through January 1 is not about Jack and Rose’s epic romance. But it does delve into the secret truths of what happened on the actual doomed ship in 1912. (Did you know there was a link to a Cold War mission?) And 11 Kimpton hotels in the area  — including the Kimpton George Hotel  — are offering a package that includes two tickets to the exhibit.

Continue the nautical learnings with waterfront adventures in D.C.’s newest area, The Wharf, where the Holiday Boat Parade, with its fireworks finale, sets the Potomac River aglow on December 1. Post parade, grab a bite at Rappahannock Oyster Bar, opening November 9 in a historic oyster shed.

Rock out at Pearl Street Warehouse, with free shows on select evenings, or at the city’s proudest new venue, the 6,000-seat The Anthem, which opened last October with a sold-out Foo Fighters show. The upcoming lineup includes Young the Giant on November 16, Lindsey Stirling on December 14, and O.A.R. on December 15.

Finally, zip over to the Navy Yard and cozy up in front of the fire pit at the waterfront’s Osteria Morini to enjoy the chef’s seasonal menu of blazing bites. 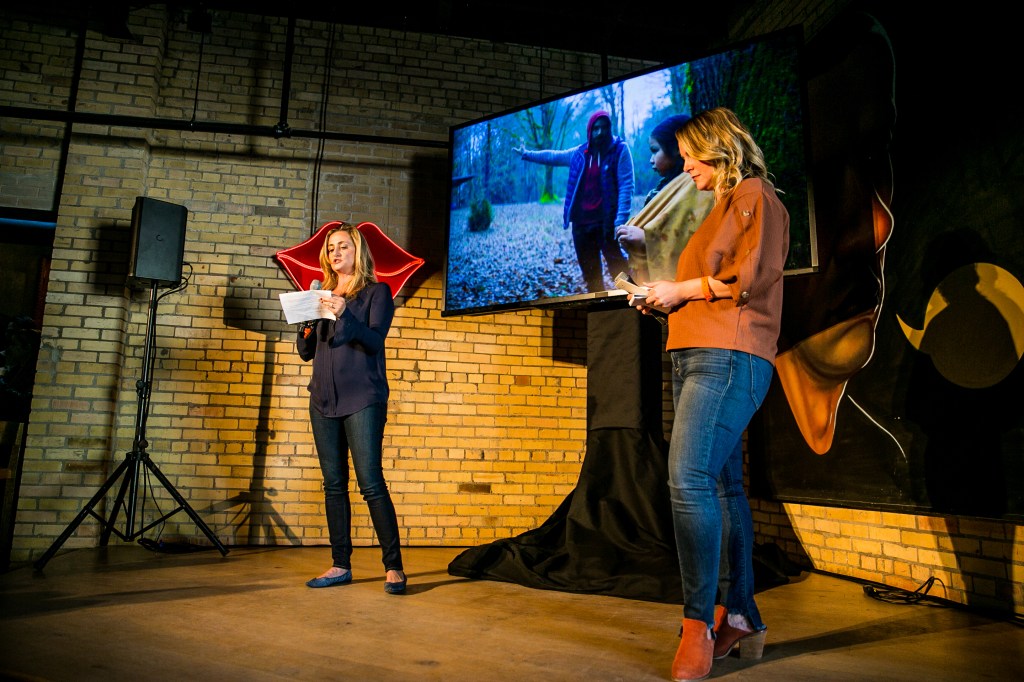 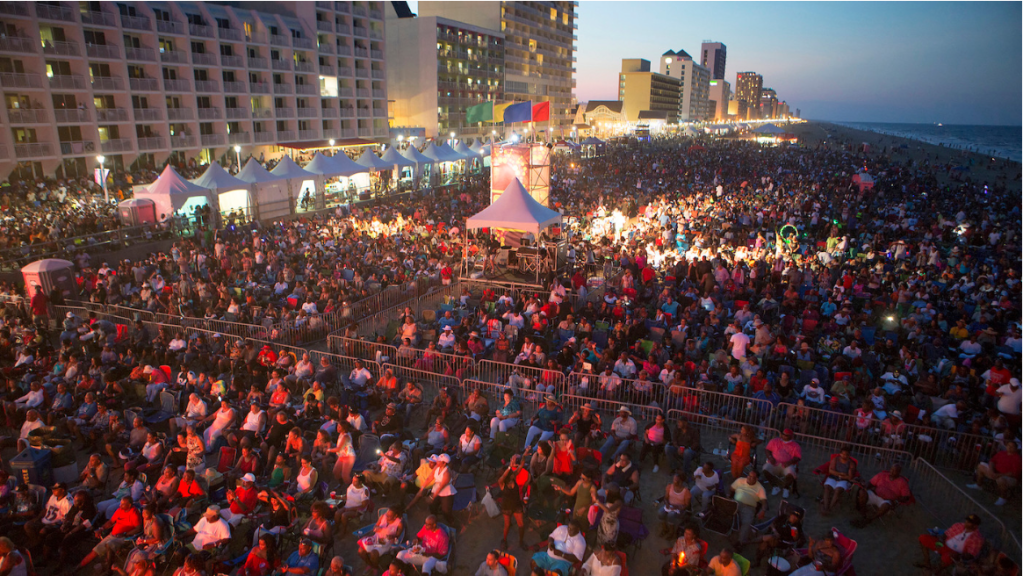